The Economic and Financial Crimes Commission has seized at least 12 properties from a former Minister of the Federal Capital Territory, Senator Bala Mohammed, and his son, Shamsudeen Bala, Punch reports. 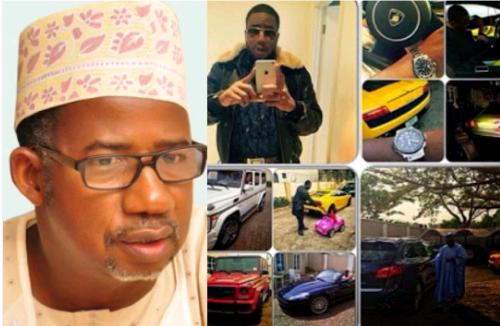 It was learnt on Tuesday that the seizures were part of investigations into a controversial land swap deal carried out by the minister to the tune of N1tn between 2010 and 2015.


“So far, we have seized about 12 properties from Bala Mohammed and his son, who he used in buying many properties. However, this is just a tip of the iceberg because we found out that there are still a lot of properties to be recovered’’, a source in the EFCC told our correspondent on Tuesday.

After investigations, we will arraign Bala (ex-minister) before an FCT High Court while his son will be arraigned before a Federal High Court anytime from now, the source added.”
Mohammed, who has been in EFCC custody for over six weeks, is alleged to have entered into some controversial land deals and allegedly gave some landed properties to his cronies for the construction of malls.

The source said, “We have evidence that the ex-minister diverted funds from Internally Generated Revenue. He also gave land arbitrarily to friends without following due process. Some of the land had even been allocated to other people but seized from them unjustly.”
Already, the commission has grilled a former Chairman of Skye Bank, Tunde Ayeni, who was also the Chairman of ASO Savings & Loans Plc over the purchase of the N7.5bn ASO Grove Estate at the Maitama area of Abuja by the bank through the ex-minister.

A detective in the EFCC, while speaking with Punch correspondent, alleged that the former minister was also a front for Mrs. Patience Jonathan, the wife of ex-President Goodluck Jonathan.

Mohammed became very close to the Jonathan family in 2009 when he called for the adoption of the doctrine of necessity when the then President Umaru Yar’Adua was critically ill and unable to perform his functions as President.

It was through this process that Yar’Adua was declared incapacitated and paved the way for the then Vice-President Jonathan to become the acting President and later President.

As FCT minister, Mohammed revoked the 1.84 hectares of land allocated to Yar’Adua’s wife, which was meant for her organisation, Women and Youth Empowerment Foundation.

The ex-minister then allocated the land to Patience for the construction of African First Ladies’ Peace Mission’s secretariat, stating that the move was in the interest of the public.

An FCT High Court, however, described the land grab as illegal and returned it to Mrs. Yar’Adua.

A source at the EFCC, however, said there was evidence to show that the ex-minister had given other plots of land to Patience in a similar fashion.

“We have evidence to show that Bala Mohammed was a front for Patience Jonathan. He abused his position and used it to allocate land to her as well. Patience has several business interests in Abuja, including a hotel,” a source stated.
Patience has since written a petition to the House of Representatives, accusing the EFCC of harassing her and her associates.

In an interview with journalists in 2015, the ex-minister denied abusing his office, stating that he was loyal to the Jonathan family and was only helping Patience with her African First Ladies’ Peace Mission’s project by providing her with free land.

He had said, “People say all sorts of things about my family: that I have stolen so and so billions; I have given plots of land to the first lady. People are always insinuating that the first lady has so much in the FCT and they are all lies.

“Most people talk this way because they want to see a situation to cause friction; an example is what happened with our support of the First Lady Mission. It is an African Union initiative. It is not personal to the first lady, it is a global initiative, but some highly-placed Nigerians were insinuating that we were taking FCT resources to service the first lady. It is not so.”