Governor of Rivers State, Barr. Nyesom Ezenwo Wike has blasted Benue State Governor, Samuel Ortom for daring to campaign against his government in Rivers State for the upcoming election tomorrow. 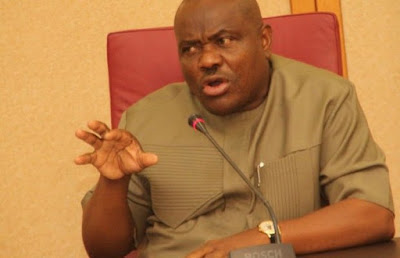 Samuel Ortom was among the top party dignitaries who graced the grand finale for the rally of All Progressive Congress (APC) in Port Harcourt, Rivers State capital on Thursday.

It was alleged that the Benue Governor, while trying to canvass for votes from Rivers electorate for his political party, made some sweeping and ‘ungentle-man’ utterances against the current state government under Barr. Wike, the statements which the Rivers Governor found unpalatable.


Reacting to the development, Gov. Wike said the Benue Governor made a ‘busy-body trip to Rivers, abandoning all the rots he has created in Benue.”

Wike particularly took a swipe on the Benue Governor for not paying salaries for the record 10 months in his state.

He, therefore, advised Ortom to go back to his state and clear the backlogs of salary arrears, even as he accused Ortom of borrowing a lot of money and using bailout funds to execute private businesses.

“That one that cannot pay salaries to his workers for almost one year? That one that Fulani herdsmen have almost finished his people and he cannot do anything? Do you want to be like Benue?‎” Wike queried.
Gov. Wike also advised Ortom to go back to his State and rescue Benue people from the shackles of Fulani Herdsmen and other insurgents who are “killing people like flies”.