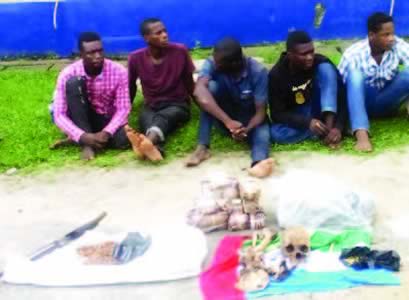 Punch reports the suspects were said to be involved in different crimes that had caused much tension in the state.

Two human skulls and some other parts of human beings were presented to press men during the parading of the suspects.

One of the skulls was identified by a suspect, Chika Amadi, to be the remains of the head of one Mr.
Ebubedike Wabali.

Amadi said Wabali was the leader of Degbam cult group in Isiokpo community in Ikwerre Local Government Area of the state.

Amadi added that the victim was killed and beheaded during a clash of supremacy between Degbam and Icelanders cult groups in the area.
“We beheaded him in February during a cult war. We did not intend to kill him, but as he wanted to escape, I touched the trigger. I never knew that the gun was not on safety,” the suspect confessed. Meanwhile, the Commissioner of Police in the state, Francis Odesanya, reiterated police commitment to restoring peace in the state.

Odesanya, who spoke while parading the suspects in Port Harcourt, narrated that the gangs were smashed during different operations at various criminal hideouts in the state by the Tactical Unit of the command and the Inspector General’s Monitoring Unit present.

He noted that the killers of Wabali had kept the skulls in their shrine and worshipped it before the team stormed the place.
“On my assumption of duty, I clearly expressed my disposition and resolve to fight crime and criminality to a standstill in the state. I have charged my men to brace up to the challenges and warned criminals to repent, relocate or face the weight of the law.Odesanya noted that the command’s Tactical and the IGP’s Monitoring Units had in their operations arrested four suspects, Chibuike Amuzuo, Amadi Nathaniel Akpokpe, Ezims Aleru and Junior Aleru, who allegedly killed the Port Harcourt-based human rights lawyer, Mr. Ken Atsuwete.

The CP also said three of the suspects, Godday Bright, Loveday Simon and Gift Israel, were members of a gang that killed a police sergeant, Mr. Tunde Ojekemi, adding that the leader of the gang, Shina Rambo, was killed during the operation that claimed the life of the sergeant.

He urged the people of the state to go about their lawful businesses without fear, adding that the police were poised to restore sanity in the state.